Starting a new business is a big consideration for anyone. Setting it up in a foreign country that is vastly different to the one you came from? A challenge for even the most enthusiastic of entrepreneurs. It’s a lucky coincidence then that Iranian-born Mohsen Vassif and partner Zuzana Fancovicova both possess the sort of steely determination and perennial optimism that is needed to get a business up and running.

Having been together for only three months, an opportunity arose to run their current employer’s Moroccan-themed restaurant in Plymouth. They accepted and the experience gave them a deeper understanding of every aspect of running a restaurant, from front-of-house and kitchen prep to brand building and securing repeat customers. It was also an opportunity to live and work in an increasingly multi-cultural city and see first-hand the styles of cuisine that were most popular.

Their employer was so impressed by their work that he told them they were: “doing twice as well as they needed to”. This praise was the catalyst for making the decision to acquire their own restaurant.Their first attempt to secure premises was unsuccessful. Mohsen says, “The owners were in a hurry and we were under-prepared. While searching for a new premises, we were referred to Outset Finance to help us shape the financial aspects of our business plan.”

The pair refined and fortified their business proposition with Enterprise Advisor Rob Guy who was impressed by what he saw: “Mo and Zuzi’s tenacity in staying upbeat was admirable. They stayed focused on perfecting their ideas, with a real attention to detail, and when another suitable venue became available, it was a pleasure to see them move quickly and confidently to secure the lease.”

The couple were referred to South West Investment Group (SWIG) to begin a loan application and were successful in securing £10,500. Mohsen explained that without Outset Finance’s help they would never have secured the financial backing needed for such an ambitious enterprise.

Their restaurant, Zuzimo!, was launched in October 2013 offering world cuisine that appeals to a wide range of demographics and cultures in Plymouth.  In 2014, the couple employ four staff members and are still in the business premises they originally leased one year ago. 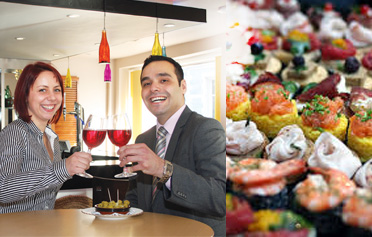