Shilpi worked in advertising in London before relocating to Bristol and starting a family in 2003. Once her children got a bit older she wanted an opportunity to run a business that would enable her to remain part of her local community and still be there for her children.

After considering her options, Shilpi approached Outset Finance with her business idea for an Indian deli in January 2014. The main challenge with her business idea was making and designing the kitchen for the deli. With limited funds, she was unable to commission someone to do this and she and her husband had to design it themselves. The viability of her business idea was assessed and she was able to access the help needed for it to move forwards. This took the form of pre-loan mentoring from an experienced Outset advisor, which gave her guidance and support while she developed her business plan.

In February 2014 Shilpi applied for a Start Up Loan. Later that month her application was approved and she was awarded a £10,000 Start Up Loan. This was used to acquire the equipment she needed and fund the kitchen, an integral part of the business venture.

Her advisor’s support and guidance through the application process was invaluable to Shilpi. “Communication with Outset Finance and the loan process itself was easy and straightforward,” says Shilpi. “We felt we were listened to and our requirements understood.” Shilpi is now receiving post-loan mentoring from Outset Finance, focused around attracting customers for their fledgling business.

Chai Shai Indian deli opened in June 2014, with the name meaning “tea or more: an open invitation”. In line with Shilpi’s original idea, they specialise in traditional Indian food with a modern twist, prepared in an open kitchen on view to their customers. The food can be eaten in or taken away and they also deliver lunch to local offices and businesses. In time, they aim to expand the business whilst ensuring it remains an integral part of the local community. 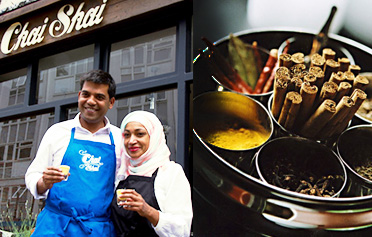